A Salute To Roy Orbison 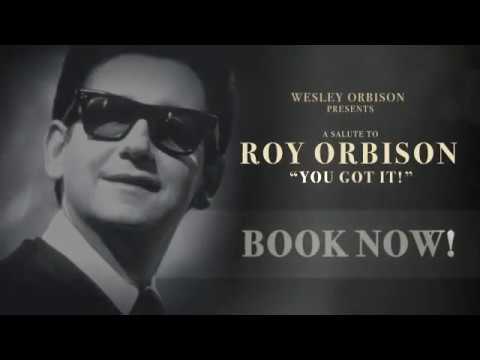 Direct from the USA “You Got It! – a salute to Roy Orbison” Live In Concert.

Wesley Orbison, Roy Orbison’s eldest son is very proud to fully endorse and present this amazing live concert experience remembering his father as we relive the sound & all the magical hits of Music Legend Roy Orbison in an International production starring The sensational Voice From Downunder John Stephan.

This is the only show of its kind in the world and is officially endorsed & presented by Roy Orbison’s eldest son Wesley Orbison. Featuring spoken word from Wesley with a very personal narrative of Roy’s intriguing yet tragic life.

Superstar Roy Orbison was one of the world’s greatest and most successful Rock n Roll Music Legends of all time.

Internationally Renowned Artist John Stephan will be celebrating & and paying the ultimate homage to The Big O showcasing all his classic hits together with Roy Orbison’s massive 15 number 1 hits right across the world with a special touch to the hugely popular “The Traveling Wilburys”.

With a voice filled with warmth, emotion, and a four-octave range, “the voice from down under” will take audience members on an incredible trip through the storied career of Orbison, covering a multitude of his chart-topping hits. “You Got It! A Salute to Roy Orbison”.

Direct from Las Vegas “YOU GOT IT! – A Salute to ROY ORBISON” will see audiences mesmerised in an unforgettable live International Concert Experience starring multi award winning artist “ The Voice From Downunder” John Stephan with over 10 million albums sold worldwide that feature his sensational voice and a string of National & International awards.

01
Jan
Your next opportunity awaits.
Townsville, North Queensland is the perfect place to live, invest, work and play!